The event was as successful as it was informative, bringing out several leaders from the Chicagoland area. Among those leaders were Manwah Lee from Archi Treasures, Jessica Rosenberg from Chicago Learning Exchange, Gail McClurg from the Southwest Florida Community Foundation and Laconyer Davis from Metamorphosis Therapeutic Group.

The conversation was led by Nerdy Media’s team of young creatives who hosted this event to showcase the work they’re doing. As you can read about here, six participants are taking part in a six-week long program that walks them through the ins and outs of creating a podcast where they share personal stories and talk about the issues affecting not only them, but other youth in their communities.

Topics such as death, gentrification, drugs, and foster care were all brought to the table with Sheina McBee kicking off the conversation.

McBee’s topic was coping with death and she shared how dealing with the loss of close peers and family members at an early age molded her into the young woman she is today. After listening to McBee’s podcast, she then opened the conversation to everyone with questions…

“When was the last time you dealt with the loss of a loved one and how did you cope with that?”

“How can we offer better counseling services to today’s youth?”

Among Mcbee in attendance were her fellow podcast participants and leading this discussion was Connell Jones, 21, who talked about how the death of his grandmother and losing peers helped motivate him to cherish his own life and do as much as he can to help his community to leave a legacy that his grandmother and friends would be proud of.

Sheina McBee leading a conversation around coping with loss.

Adding to the discussion were Jasmine Kirkwood, 20, Winther Polk, 21 and Levell Gamble, 20. All of whom were in agreement that they felt they didn’t receive the necessary support from their school or community to grieve properly over the loss of close friends. The group shared solutions for helping the next generation and also introduced the topic of therapy and how having someone older with an open mind might have helped them through the coping process.

Next up for discussion was Levell Gamble who focused on gentrification and how it has affected his family and friends. This topic brought an interesting perspective on how gentrification not only effected his living situation but also the group as a whole and their learning experience.

“They keep closing down schools. Merging children from different gangland areas and forcing them into one school in one area – how do they expect the children to learn when they have to keep looking over their shoulders?”

Nodding heads in agreement, Mcbee added to Winther’s statement “It’s like they’re throwing the kids away.”

Lavell Gamble introduces the topic of his podcast episode – gentrification.

The conversation then transitioned to Connell Jones’ topic of drugs. In Jones’ episode he shared his first experience with marijuana having started at the beginning of his adolescence. The group then discussed their first time with marijuana and the alternatives they now use to resist the urge.

The group shared advice for beginner smokers suggesting to always do it with an individual they trust and to do it in moderation, otherwise the stressors of life can lead to addiction. Jones’ believes there should be more discussions held about marijuana to help create awareness in other youth so they don’t learn the habit on their own.

Winther Polk was the next to share, telling her story of growing up in the foster care system.

Polk was a ward of the state until recently when she emancipated herself at 21. She explained how growing up she was consumed with pain, sadness and depression and didn’t have relationships with family members like other children did. People came in and out of her life often leaving her with feelings of detachment. Later, Whinter went on to explain how she is working on her communication and being better at opening up to people.

Listening to Polk’s podcast and followup questions shined a light on the voiceless community of foster children who are often times forgotten about and misjudged. Always on the move, not knowing where or with whom they will be living, is a unique challenge and one that can take an emotional toll.

Concluding the evening’s discussion was Jasmine Kirkwood who’s podcast reflected on the emotional trauma she dealt with as a child and how that motivated her to be an advocate for children with difficult pasts.

Kirkwood’s story was about her father’s absence. A man who was in and out of jail and dealing with substance abuse problems, he missed many pivotal moments in young Jasmine’s life from birthdays to prom to graduation.

Then, once out of prison and having moved away to Atlanta, there was another life altering event – he was shot. This incident left him paralyzed and prompted Jasmin’s mother to move to Atlanta to help in his rehabilitation.

This long chain of events left Jasmine feeling, much like the others in the group, abandoned by the adults they cared about.

Though the evening’s topics were weighty, the discussions all ended on positive notes with many solutions being shared.

Ultimately, all agreed that iron sharpens iron and surrounding themselves with good people who strive to achieve similar goals is a key factor in forming strong community and family.

The Nerdy Media Crew (aka The Collective). Iron sharpens iron.

Nerdy Media would like to thank the LiteHouse Whole Food Grill for providing the space to host this important conversation.

To stay up to date on all things Nerdy Media, including upcoming events and the upcoming podcast launch, join their Nerdy Newsletter! 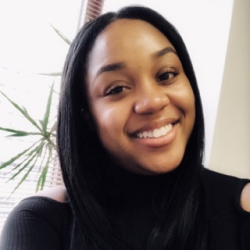 Rachel Johnson, born and raised on the South Side of Chicago, graduated from Columbia College Chicago with her B.A. in Journalism. From a young age, she has always had a passion for helping others; especially those in her community. With the, “it takes a village” values instilled in her throughout her childhood and adulthood, Rachel has made being there for those in need one of the guiding principles in her life.

Stay up to date on all things Nerdy Media.